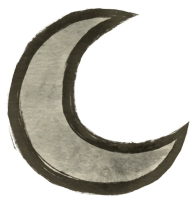 The world of Mercuria is dominated by one central figure, which is the Moon, provider of all that is good, alive, and creative. It is both physical and primal, representing both change and tradition. Scholars use the charts of moonrise and moonset to predict the outcomes of wars and fortunes of love. Storytellers say that the Sun (source of all evil) is responsible for the Moon's exile into the night, and foretell a new Age in which the Moon is restored to its rightful place on the throne of heaven.

Scholars break down the realms of the Moon's influence into four major elements, Blood, Wild, Steel, and Darkness, which correspond to the phases of the Moon.